Buminyji is the Yindjibarndi name for an area located around Thunggawarna creek that was later established as a ration camp.

Buminyji was an Aboriginal law ground and living area for Yindjibarndi people where ceremonies and corroborees were once a regular way of life. Buminyji provided convenient access to the stations and in the late 19th century a food ration camp and police depot were established there by the government. This operated as lock-up; a place for collecting statistics about Aboriginal people and their families; a workplace for the elderly and infirm who engaged in light duties (such as polishing leather); a medical post; and an Aboriginal burial area. Having the police depot and ration camp located close to each other led to the forced labour of Yindjibarndi people by the police of the day. Some Yindjibarndi people, usually the best trackers, were given an ultimatum by police of choosing their own death or tracking down Aboriginal people wanted by the law. This exploitation of Yindjibarndi people was heart-breaking and complex, and had significant impacts on individuals, families and the community. People were often removed from Buminyji to towns and prisons like Roebourne, or further south to Rottnest Island.

The Buminyji Burial area is located close to the Buminyji Outcamp. Only recently discovered, it is unknown who this final resting place was for – Yindjibarndi Elders, policemen, or possibly trackers. Whatever the case, for the Yindjibarndi traditional custodians this is a peaceful place and a sacred ground to be left alone. Since it is unknown who was buried here and who’s spirit persists, it is considered culturally unsafe for women and uninitiated men to enter the burial area.

In 1892 a petition was forwarded to the Colonial Secretary from the settlers and residents of the Tableland district requesting the establishment of a police camp. In 1896 a site for the camp was selected which covered 100 acres and was declared a police reserve. Construction commenced in 1897 but was twice closed and reopened, only to finally be burnt down and not rebuilt. This reflected the differing opinions between settlers and the police. It was influential station owners requesting the presence of law enforcement, but the Commissioner of Police remained unconvinced that it was necessary. The police depot finally closed in 1924, and when the Native Welfare Department decided to move Aboriginal people from ration camps to reserves closer to the coast, people gradually left Buminyji. Yindjibarndi people later returned when Buminyji Outcamp was picked as the site of Yindjibarndi Native Title Claim discussions in 1996. These discussions eventually led to their Native Title determination. It was under a shady tree at the Buminyji Outcamp that the Yindjibarndi people chose to have these important discussions detailing their connection to this country.

As part of the archaeological recording of Buminyji, Yindjibarndi man Rodney Adams explored the old ration camp. There are remnants of the old police depot which was built from wood, metal and wire.

Remains of an old bicycle at the ration camp

Rodney Adams inspecting the old well that Aboriginal people had dug on the banks of the creek before Europeans arrived in the region.

Flagstones by the old well 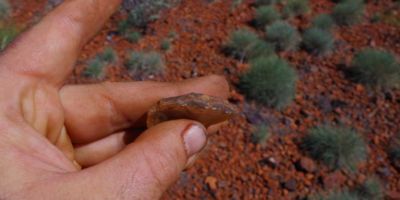 An old well was dug by Aboriginal people on the banks of Thunggawarna Creek and once Europeans arrived it was expanded to service the horses and visitors that passed through. Large stone slabs were laid around the edge and these are still visible today.

Artefacts found at the ration camp weren’t just made from stone. Pots and bottled rations that came in underwent traditional knapping techniques. This included fragments of a broken Teacher’s Whisky bottle, and other glass items such as a bottle manufactured at the Perth and Fremantle Bottle Exchange, possibly for ginger beer.

A small dolerite slab has been laid at the ration camp. Several names and numbers appear but its purpose is still unknown. The etchings appear to have been done after it was laid.

Join us on a tour of Buminyji and listen to Yindjibarndi elders tell the history of the police station, ration camp and settlement here. You can see artefacts, an old well and shelters remaining from Aboriginal and European people who lived here. This panoramic tour lets you see Buminyji from the perspective you would see it if you were there, with key features and media content embedded in the content of the place.

These 3D Models provide an alternative view of key parts of Buminyji. 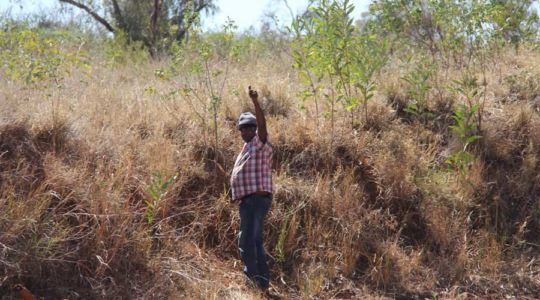 Video and interviews from Buminyji.